Today’s video features one of my favorite tunes from the wonderful musical Chess.  I wore this 45 out back in the day.  Enjoy!

Okay, so you can’t dance to this number, really, but what a song!  Enjoy a little Freddie today!

A little something to celebrate the day from my favorite Irish group!  Sets your feet to tapping, don’t it?  Slainte!

Happy St. Patrick’s Day to all!  Drink in this vista, where my heart resides, if not my body!  Enjoy the day no matter where you are!

This week’s happy tune is a blast from the past 80s-style!  Enjoy!

Take a trip in the Wayback machine with me today!

A blast form the past, this song had me bopping in my chair this morning.  Big shout out to one of my best friends (yes, you, Mr. U) for reminding me of this tune.  Ah, I love me some Rick!

Speak to the Sky by Rick Springfield

Had a really terrific time the other day with author and interviewer Kelly Blanchard, who interviewed a character from my Coffee & Crime Mystery series, the inestimable Charlie McCallum.  Check it out and get a peak inside Charlie’s head first-hand!  Also, make sure you check out ALL her character interviews, with characters from many books and many genres, at her website, Meeting with the Muse.  They are a blast to read and I’ll bet, based on the characters you meet, you’ll find some books to add to your TBR (To-Be-Read) list! 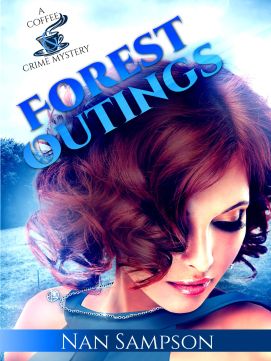 Over the last year or so, I’ve interviewed many of Nan Sampson’s characters. One of those characters was Charlie. If you would like to read the first interview I conducted with him, you can find it on Nan Sampson’s site here: https://nansampsonauthor.com/2015/07/30/an-interactive-character-interview-meet-charlie-mccallum-from-my-ellie-gooden-mystery-series/. In this interview, I was able to catch up with Charlie and see […]

via Character Interview: Nan Sampson’s Charlie — Meeting With The Muse

Was interviewed by the awesome Kelly Blanchard, the Muse, a few days ago. So much fun catching up with her about the Coffee & Crime mystery series and writing in general. Check it out below. And on Friday, she’ll be publishing another interactive character interview with Charlie from my Coffee & Crime series. Sure to be a fun read!

Meeting With The Muse

For this interview, I actually met with an author who I’ve interviewed several years ago. Since then she has released a few new books, so I thought I would check up with her. Her name is Nan Sampson, and she writes MYSTERY. If you’re interested in her first interview, you can find it here: https://meetingwiththemuse.com/2015/07/08/author-interview-nan-sampson-bach/. However, this interview we discuss her mystery series and get caught up to date. As always, ‘Kelly’ was written by me, Kelly Blanchard, and ‘Nan’ was written ’Nan Sampson’. 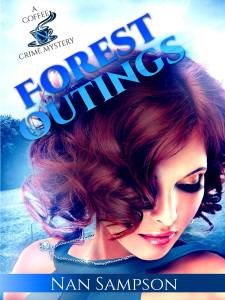 Kelly dusted off shelves in her Muse Shop as she waited for the timer for her cookies to go off. A few minutes passed, and she heard the timer sound, so she put down the dusting cloth and went to the kitchen in the back of the shop to pull the cookies off the cookie sheet.

She had just finished plating the hot cookies on…

Forest Outings, the third book in the Coffee & Crime Mystery Series, is now on Amazon for sale.  Whoo hoo!!!!  Well… the e-book is there.  It may be a couple of days before the paperback launches.  I’m very excited about this one and I hope you all enjoy it as well.

If you do read it, please consider leaving a review on Amazon.  Indie authors depend on those reviews for visibility and I would be eternally grateful.  Which means I would be predisposed to send you chocolate…  jus’ sayin’.  Look!  See all the chocolate you could have! 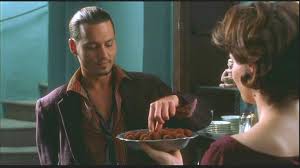 Oh.  Wait, that’s Johnny Depp EATING chocolate.  Obviously, as much as we all might like it, I can’t actually send you Johnny Depp.  Eating chocolate.  Playing guitar.  Phew, is it hot in here?  Hang on, here’s the correct image. 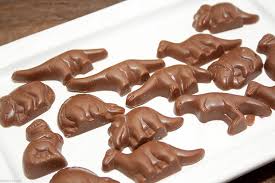 Anyhoo, hope you’re having a spiffy day!  I’m tickled pink about Forest Outings and it’s inevitable listing on the New York Times Best Seller List.  Hey now.  Be nice.  A girl can dream, can’t she?  And, as always,

“You’re as bad as Walt Disney,” my editor said to me after finishing a draft of one of my WIPs (Works in Progress).  “All your characters are orphans.”

“That’s not true,” said I, vehemently.  “I mean, okay, Ellie from my Coffee and Crime mysteries is, but Ellie’s parents’ murder is part of the series arc.  In my steampunk book, though, the main character, Jonathan… oh.  Still, his father was really old when he died.”

“Yeah, but his mother died when he was young.”

“Okay, okay, but in the space opera trilogy, Peder’s parents—”

“Are dead.  He was dropped off on the door step of his foster father’s estate when he was three.”

The answer came almost instantly.  It’s all Walt Disney’s fault.  I remember when I was little, how I had to be taken, crying inconsolably, out of the theater whenever my mom would take me to see a Disney movie.  Bambi, Dumbo, Pinnochio.  Orphans all, and a plot line rife with personal loss.  Is it any wonder I have this template of the hero that includes the death of a parent?  The better question is, what the heck was wrong with Walt Disney?  I didn’t create this monster.  He did!

“One could reason,” I therefore proposed to my editor, “that the death of a parent or parents leaves an indelible mark on a character.  Those kinds of traumatic events make for great internal conflict and give the character depth and resilience.  Right?”

“Yeah,” she said, “but you kill them in such gruesome ways.  Remember in that fantasy novel how you killed the guy’s parents in a raid on their village?  And then, just when the kid was living happily with a foster father, you had the house attacked and his foster father eviscerated on the stairs.”  She shuddered.  “I mean, who does that?  Wouldn’t a knife in the back have sufficed?”

“I was going for pathos.”

“An arrow through the chest is pathos.  Evisceration is Roger Corman.”

Pah!  “It was dramatic,” I countered, and ended the discussion.

Still, it caused me to ponder.  Good books are rife with horrific events – not necessarily physically horrific, but certainly emotionally so.  The reader wouldn’t care much about the story if the stakes for the character weren’t high.  Yet even so… it seems to me that writers – or maybe just me in particular – find great joy in torturing our characters.  Again and again and again.  I mean, wasn’t it Nabokov who said that the job of a writer is to chase your character up a tree and then once they’re up there, throw rocks at them?

Think you’re safe up there now?  Hah!  I can fix that.

See, this is what it’s like to be a writer.  The goal is always ‘just how bad can I make it for this poor soul?’.  And then, just when the reader thinks it can’t possibly get any worse… heh heh heh.

You kill their OTHER parent!

My non-writer friends tell me it’s probably a good thing that I’m a writer, cuz otherwise I might do all these horrific things to real people (wait, these characters ARE real people…at least to me).  I always smile sweetly and respond with, how do you know I’m not writing from experience?  That usually shuts ’em up.