New year, new start, and I’ve decided I need a new look for the site. While I’m figuring out what that might look like, and since I haven’t posted in donkey’s years, I thought I’d say hey there! I’m still here and naturally, still writing. In fact, I’ve got a new series coming out later in the summer. A little bit mystery, a little bit history, a little bit rock and roll — er no, actually. No rock and roll at all. What there is, is a lot of fun. The series is historical fantasy, set in 1920s Paris and features a kick-ass witch. So in that sense, it is a bit like the Coffee and Crime mysteries. And there will be pastries! And a Norwegian, although this one is female. It’s full of so many fun surprises and I can’t wait to start teasing you all with cover reveals and so forth. Anyhoo, I’ll be in touch soon with more deets. In the meantime, here’s a bit of springtime in one of my favorite cities. Nolo bastardes non carborundum! 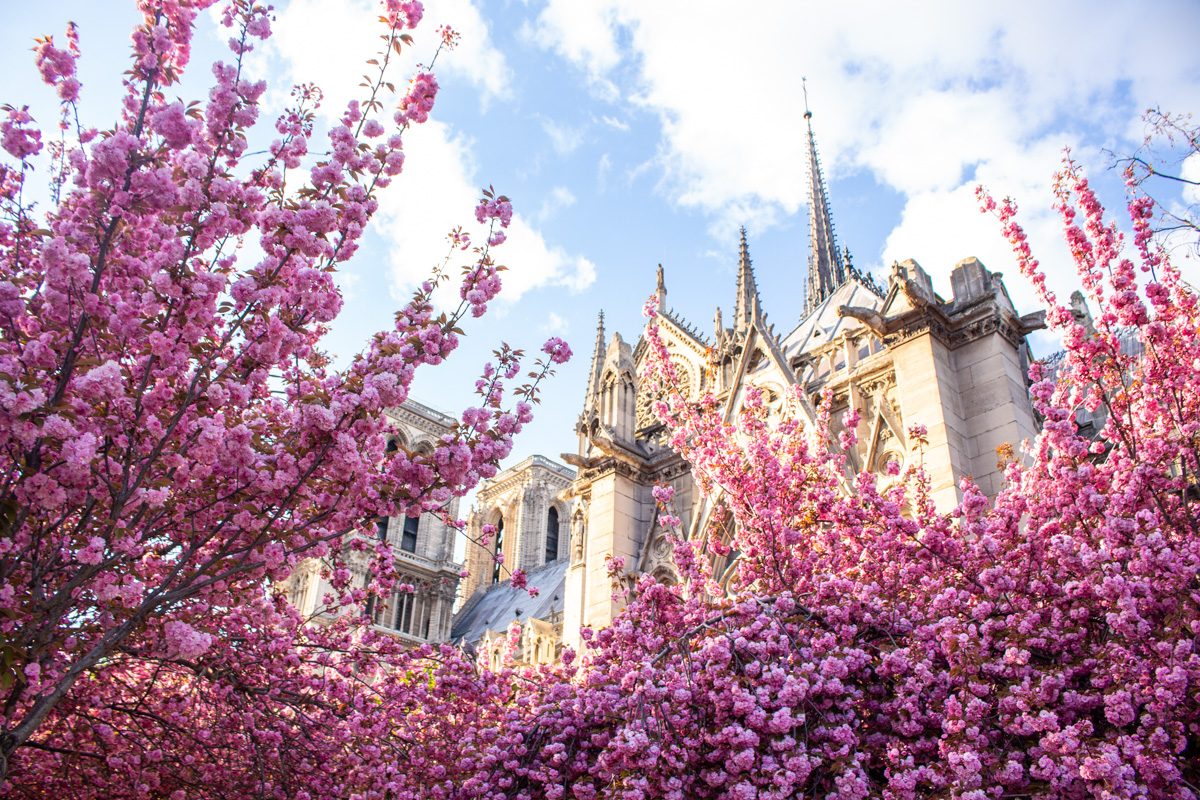 I asked fans on my FB page yesterday if anyone had suggestions for today’s Friday Dance Party tune and I got some interesting suggestions.   So today you get TWO for the price of ONE!  First, something with a nice, funky beat.  I give you the Commodores and Brick House.  This is a song that my daughter used to dance to when she was three!

And then, from another fan, something a little hipper and wilder.  I present for your viewing pleasure The New York Dolls and Dance Like A Monkey!  Come on, shake it like a monkey like you just don’t care!

That’s all for today, my friends!  Keep it loose and as always,

Hello, fellow babies!  Exciting news for you.  I’ll be signing books (and drink napkins and whatever else floats your boat) at the Barnes and Noble in Crystal Lake, IL on Thursday, July 27th as part of their New Writers Night.  If you’d like to come out to meet me, ask me to introduce you to Charlie (I get that a lot), beg me to include you in the next Coffee & Crime mystery, or just to hob nob with the local literary elite, be there at 6 o’clock sharp!  I’m so excited that my books will physically be in a real book store, I’m ready to explode!

As Bob Barker would say, come on down!  We’ll have a blast and I’ll share with you what’s going to happen next for Ellie Gooden, Charlie, Erik the Red and the whole crew from Horizon, Wisconsin!

Hope to see you there! 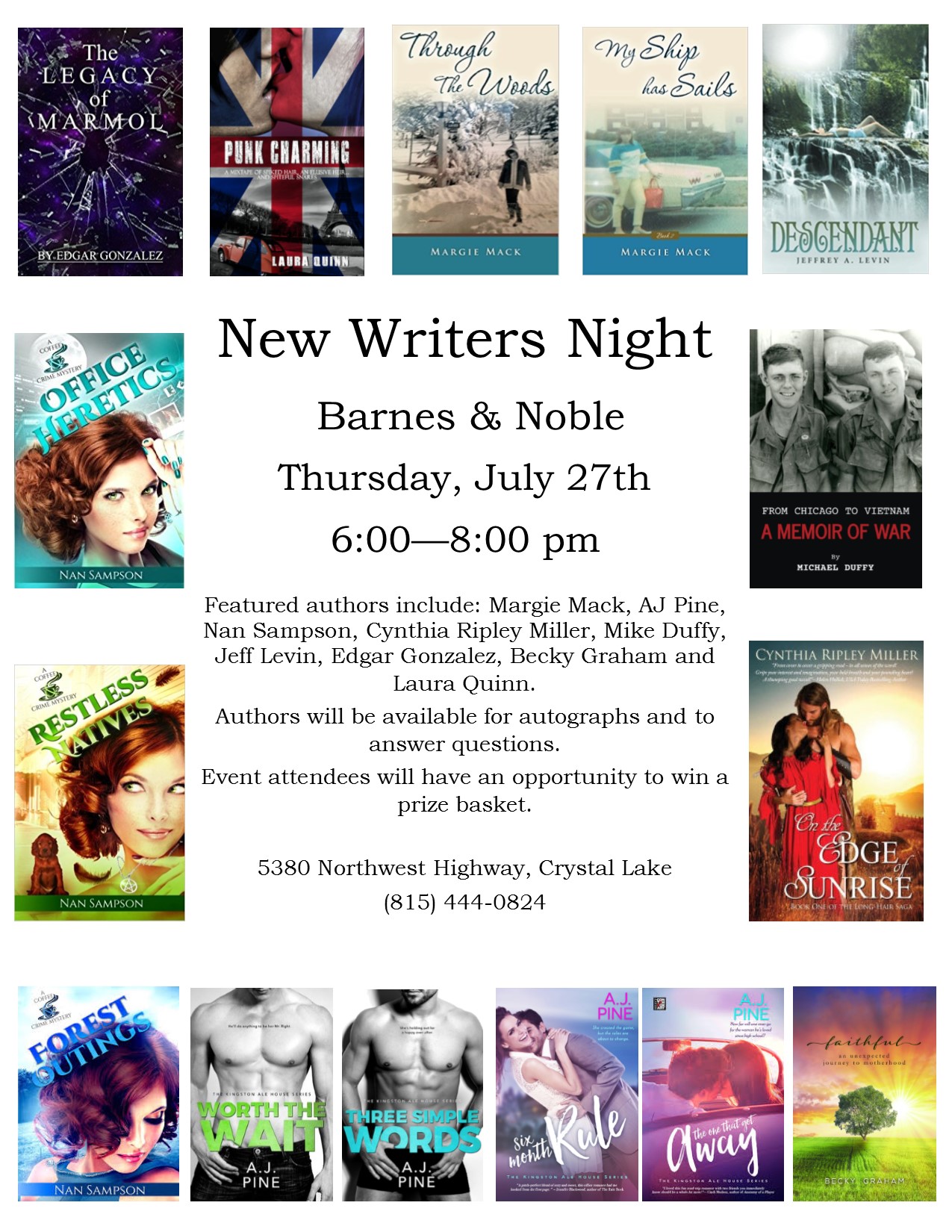 … that grab you by the short hairs and make a mess of your nice, organized life.

“Does your dog bite?”

Case in point.  A few weeks ago, noticing that the Admiral (aka Nelson, the very pushy poodle) was getting very shaggy, and needed an appointment with his barber (read: groomer) and knowing that my husband, who usually takes him, was working a lot of hours, I called, scheduled an appointment for a Saturday and took Nelson in myself.  The ‘barber’ (shh, don’t let him hear you say groomer, he gets all weird about it), was insanely busy, with every table taken and every, um, let’s call them ‘spa cubicles’ (Don’t say crate.  Don’t ever say crate!) filled.  I passed Nels to the wife of our – ahem – barber, who’s been taking care of Nelson’s sartorial needs for several years now, made sure she had my phone number and toddled out.

Feeling accomplished, and a little smug, I went home and got on with the rest of my day.  I was working on a particularly intense chapter in my novel, and was startled when barely forty minutes later the phone rang.  “Hi,” said I.  “Are you done already?”

“Actually, there’s been a little problem.”

Uh oh.  “Problem?  What kind of problem?”  Had they nicked him?  Clipped his toe nails too close?  What on earth?

Oh crap.  “Oh my gosh, is he okay?”  Visions of expensive medical bills, getting sued, maybe even having to put the dog down…

“Oh he’s fine.  It didn’t break the skin.  But Nelson is now curled up in a corner and won’t come out.”

It was a shocker.  Nelson has always behaved marvelously at the groom– I mean, barber.  I never imagined something like this.

Now, don’t get me wrong, Nelson has his crabby dog moments.   To hear Nelson tell it, his ‘fits of pique’ are only natural.  After all, it’s stressful being the driving force behind the British Navy.  He says it’s a constant a struggle to lead his crew with only one arm (at which point I have to remind him that he does, indeed, have all four paws), that no one truly appreciates his dedication to the Queen.  (Queen?  You mean me, you dinglefutz?) Yes, the Admiral is a prima donna. 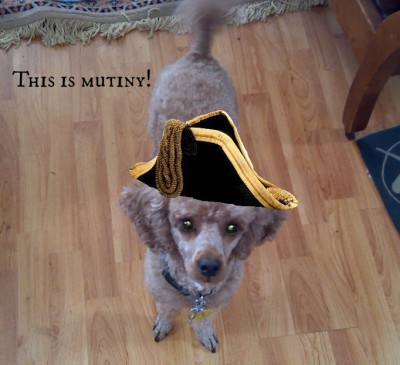 But I never thought he’d actually nip anyone.

Our ‘barber’ was super sweet when I went to pick up the little monster.  We talked about what was different this time – lots and lots of dogs there (which makes the Admiral anxious), the fact that he had to be put in a crate, (which makes him really anxious) and lastly, and probably the real kicker, I was the one who dropped him off.  Now, you have to remember, my husband is ALWAYS the one to drop him off.  And Nelson is a mama’s boy.  I think he must have thought I was abandoning him there – or something.  So the barber and I agreed to give the little knucklehead a few weeks to calm down/forget the whole thing and try again.

So.  Fast forward two weeks.  Husband took the Admiral back to the barber this morning.  Took him straight in, and Nelson’s barber took him back to the basin for his wash right away, and even the barber’s wife held him after he was finished until hubby could pick him up (which was only a couple of minutes) so he didn’t have to be put in a crate – I mean, spa cubicle.  The upshot?  Nelson was absolutely golden.

All of which tells me two things.  One, screwing with the Admiral’s routine is bad.  Like, crossing the streams, bad.

“Egon, you said crossing the streams was bad.”

Two, the Admiral has me, and pretty much everyone else, wrapped around his furry little pinkie tighter than a choke chain on a lunging chihuahua.  Tell me something I didn’t know, right?

And just for fun, here are the before and after shots.  Yes, that is the same dog. 😁

Keep it cool, fellow babies.  And as always,

Okay, going WA-A-AY back for this one.  Back to my hippie-dippy trippy days.  Tell me this doesn’t make you want to put flowers in your hair and dance with wild abandon around a bonfire!  Yeah.  Didn’t think you could!

Apparently I’m stuck in the 80s these days.  Here’s another blast from that heady past.  IF this doesn’t get you on your feet, you might be a mummy… 😝

Oh how I love these guys!  Today, I give you a hit from my hometown band – a little Cheap Trick to kick off your Friday!

Ah, I remember driving to the mall (during gym class) with my best friend, my feet hanging out the window (my Dr. Scholl’s sandals were on the floor below me), head banging to this song!  Happy Friday!

Extra Special today!  ELO – Mr. Blue Sky!  Can’t not dance to this one.  Sadly, I couldn’t find a good vid from Guardians of the Galaxy 2 showing Baby Groot shakin’ his groove thang to this tune, but if you’ve seen the movie, you can imagine it.  And if you haven’t…  Egad, man, what on earth are you waiting for??  Go.  Immediately.  Stop reading this!  Get to a theatre ASAP!  Happy Friday!

Something a little mellow today, from one of my favorite bands.  Still missing you, Glenn!