Gone but not forgotten… 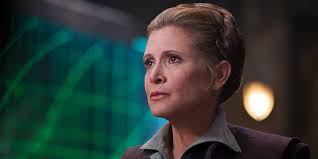 Much like millions of other people, I was rocked to my core at the end of December by the death of Carrie Fisher.  Her passing capped a year-long litany of loss, starting for me personally with the death of Glenn Frey.  But Carrie’s death was perhaps the most impactful for me.  Maybe because it came right at the end and was the straw that broke the camel’s back.  Maybe it was because she was only three years older than me.  Maybe it was because she was the first woman who showed me, at a very impressionable age, that a woman could be both strong and feminine, soft yet tough.  That a woman could carry a blaster, rescue herself and one-up even the most hard-hearted mercenary, all while saving the galaxy.

In addition, although Ms. Fisher had a tumultuous personal life, she weathered it all with a wry wit, re-invented herself to meet the changing times and at every turn of the road managed to stay true to herself.  She was, unabashedly, her own woman.  Plus, her relationship with her dog, Gary, touched my heart in ways few other things could. I mean, how could you not love someone who loved that sweet pup?

I posted, when I was able to form coherent thought again, on Facebook, absolutely heartsick: 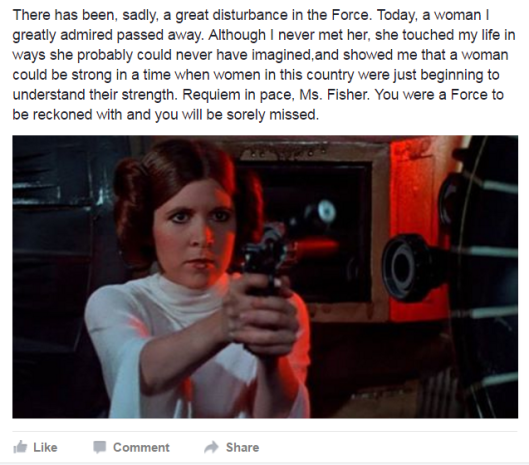 Hoaky, yes, but it was my cheesy homage to a woman I greatly admired.

And then, later in the week, someone I know shocked me to the core again when they asked me why I was so devastated by the death of a woman I’d never even met.

I had no words at the time to explain to this person that even though you may never have met someone, they can still have a profound impact on your sense of self. Strangers, even those who have been gone from this earthly plane hundreds of years before you were born, can teach you about life, strife, honor, courage, and selflessness.  We meet these people on the screen, in books, through recordings, or via storytelling and we connect with them – or at least our perception of them.  Something touches us deeply and we feel a resonance.  And that resonance carries us forward, becoming a seed inside us, part of who we are.  They become personal heroes, icons, representations in our psyche of the essence of the role or attribute we associate with them.  They become that the ideal or perfect model of something, like an object from Plato’s Ideal realm.

And then that person, who is now so much more than a person, dies.  And we (or perhaps I should just say I) feel bereft.  The earth shakes.  The foundation crumbles and for a moment, the fragility of reality comes crashing down and that thing, that ideal, dies too.  If our heroes can die, then so can we mere mortals.  All is impermanence.  The rock we cling to is now dust and we no longer know how to stand.

Of course, in time, we pick ourselves up and hopefully, using that seed inside us, learn to stand on our own, building up that rock inside us as memory and guiding light.  But the grief is real, even if the person was not personally known to us, was not someone we sat down and had coffee with.  The grief is very, very real.

I am still reeling.  But I have seen enough heroes cross over to the Summerland this year that I am learning how to find my balance more quickly. Perhaps that is the lesson here.  To learn to get up faster from the vicissitudes of life, so that we can make the most of what ever number of days we have remaining.  Because clearly, if 2016 has taught us nothing else, every day, every bloody stinking glorious precious day, has to count. 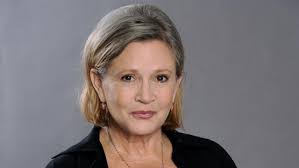 And to the rest of you,